Importantly, Professor Min reported an overwhelming percentage of his donations from individuals. According to fundraising analysis conducted by Voters Edge, over 90% of Dave Min’s contributions came from individual contributors, as compared to only 30.65% for Senator Moorlach. 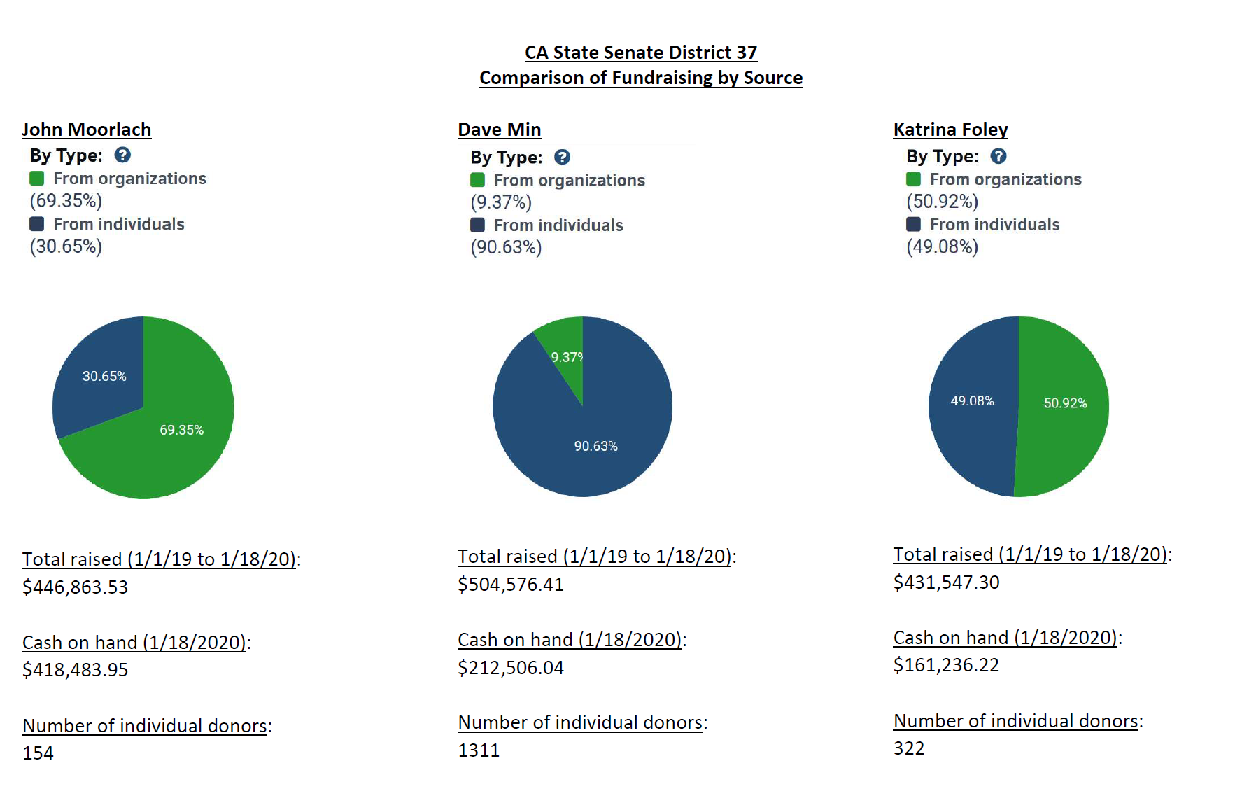 “The people of State Senate District 37 are tired of politics as usual, and they are showing this through their overwhelming support for Dave Min,” said Min campaign spokesperson Orrin Evans. “Dave Min is not a career politician. He’s a UC Irvine law professor and nationally recognized economic expert who has spent his career fighting to defend the American Dream and ensure equality for all.”

“While John Moorlach is relying on corporate special interests to fund his pro-Trump agenda in Sacramento, Dave Min has the grassroots support of Orange County families behind him. He proudly stands with working families, immigrants, and teachers.”

These latest fundraising numbers continue the strong momentum for the Dave Min for State Senate campaign into the March 3 primary election. According to the only publicly released polling in this race, Dave Min is well positioned to advance out of the March 3 primary, and he is the only candidate in this race to enjoy endorsements from the California Federation of Teachers, the California Teachers Association, the Brady Campaign to Prevent Gun Violence, the California League of Conservation Voters, and SEIU California, along with endorsements from State Controller Betty Yee, 11 members of Congress (including Reps. Ted Lieu, Gil Cisneros and Alan Lowenthal), and 10 members of the State Legislature (including Sen. Richard Pan and Asms. Sharon Quirk-Silva, Rob Bonta, and Patrick O’Donnell).

He has also received endorsements from an overwhelming number of elected officials, local activists, and organizations, including:

David Min is a University of California Irvine Law Professor, father of three, and a former economic policy staffer in the United States Senate and for the Center for American Progress. Min began his legal career at the Securities and Exchange Commission to protect the retirement security of seniors, turning down high paying jobs to serve the public interest.  He is a leading expert on banking and housing policy.

For Our Future in OC!