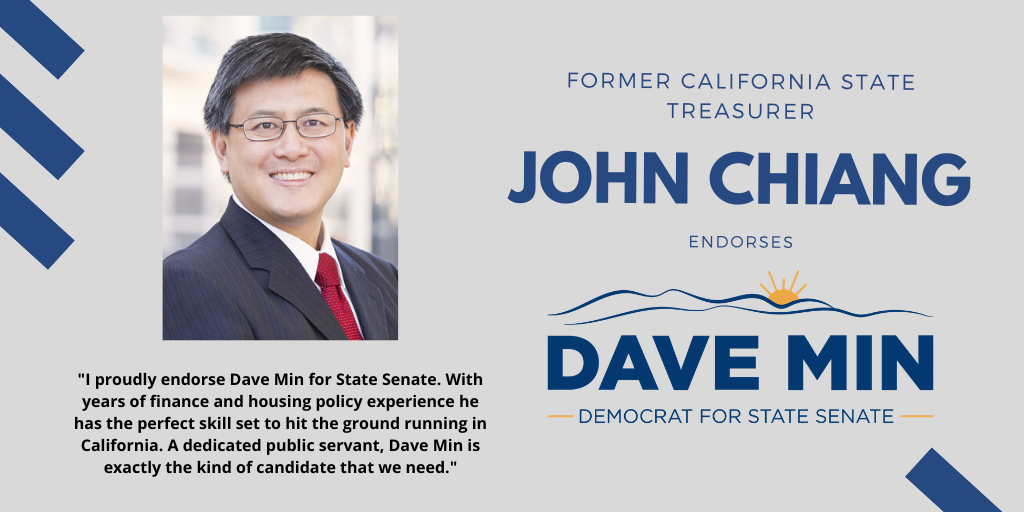 “I proudly endorse Dave Min for State Senate,” said former California state Treasurer and 2018 gubernatorial candidate John Chiang. “With years of finance and housing policy experience, he has the perfect skill set to hit the ground running in California. A dedicated public servant, Dave Min is exactly the kind of candidate that we need.” 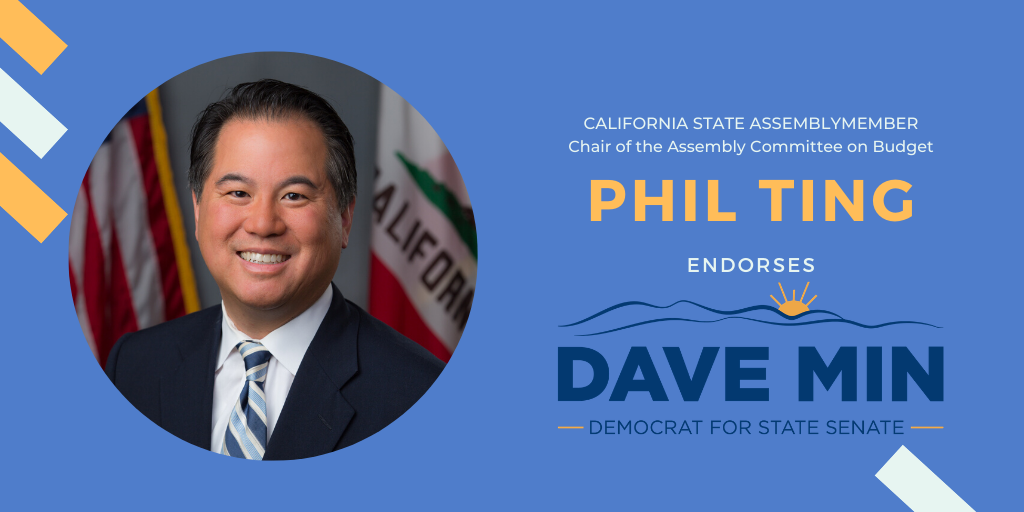 “California needs lawmakers who work to strengthen our economy and environmental health while standing up to Trump’s efforts to undermine our state’s leadership.  Dave Min is exactly that person and that’s why I am endorsing him for State Senate District 37” said Assemblymember Phil Ting. “His deep financial knowledge, personal experience fighting for equality, and passion for his community makes him the best candidate, and I look forward to standing with him in the legislature.”

“We applaud Dave Min’s commitment to increase Asian American and Pacific Islander (AAPI) representation in elected office, Dave’s progressive vision and values on AAPI issues, and his track record of elevating the voices and visibility of AAPI communities in Orange County, CA.”

“I am so honored to have the support of such a diverse coalition of leaders and organization.” Said UC Irvine Law Professor Dave Min. “We are proud that our supporters represent the diversity of Senate District 37. When I’m in the State Senate in 2021, I hope to justify their faith in me.”

According to the only publicly released polling in this race, Dave Min is well positioned to advance out of the March 3 primary, and he is the only candidate in this race to enjoy endorsements from the California Federation of Teachers, the California Teachers Association, the Brady Campaign to Prevent Gun Violence, the California League of Conservation Voters, and SEIU California, along with endorsements from State Controller Betty Yee, 11 members of Congress (including Reps. Ted Lieu, Gil Cisneros and Alan Lowenthal), and 10 members of the State Legislature (including Sen. Richard Pan and Asms. Sharon Quirk-Silva, Rob Bonta, and Patrick O’Donnell).

He has also received endorsements from an overwhelming number of elected officials, local activists, and organizations, including:

David Min is a University of California Irvine Law Professor, father of three, and a former economic policy staffer in the United States Senate and for the Center for American Progress. Min began his legal career at the Securities and Exchange Commission to protect the retirement security of seniors, turning down high paying jobs to serve the public interest.  He is a leading expert on banking and housing policy.

For Our Future in OC!